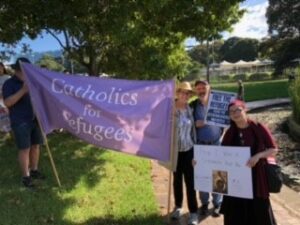 I never want to go to another Palm Sunday rally again. Over the last two decades – with a brief respite during the heady days of national compassion, or indifference, from 2007 to 2012 – I have been to almost every such rally. The numbers tend to ebb and wane depending largely on the media cycle and whether there have been riots or drownings or more results showing the brutal nature of this policy. But the chant remains the same: “What do we want? Justice. When do we want it” Now.”

Last Sunday we all gathered again – though this time under the beautiful new purple and white banner for Catholics for Refugees. The numbers in Sydney were down in part I think, because a lot of the community think this is all old news. Afterall the boats have stopped and nearly all the families, the kids and single men are out of the camps in Nauru and Manus Island. Slowly the men held in hotels across Australia are leaving, so what’s the problem?

For the full story, see the Justice and Peace Office website.