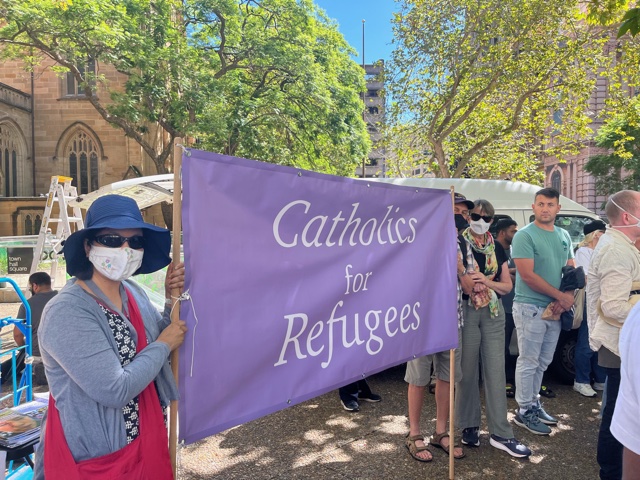 On Sunday 20 March 2022 around a thousand people gathered outside Sydney Town Hall to advocate once again for justice and dignity for people seeking protection in Australia.

The familiar calls to close the camps, end immigration detention, reinstate permanent protection visas have only increased in fervour over the years now that Australia’s deplorable treatment of refugees has become entrenched for so long. Pulled together in just a few days the solidarity and compassion on display were as strong as ever.

A small but stalwart group of us met before hand for light lunch and were able to share our experiences of walking with people seeking asylum over the previous years. With the Catholics for Refugees banner prominently unfurled, we were privileged to be there in solidarity with our colleagues and friends from the Jesuit Refugee Service, House of Welcome and SJ Around the Bay. It was also great to know that there were several other Catholics spread out throughout the crowd, standing in support of people seeking asylum.

Everyone present was moved to hear from Thanush Selvarasa, a refugee released from Park Hotel, Melbourne, and Mustafa, an Afghan refugee on temporary visa, who once again highlighted the atrociousness of Australia’s policies and practice towards people seeking asylum.

We were also privileged to hear from Asma Nayim Ullah (a Rohingya community youth leader and refugee on temporary visa) who described her family’s harrowing journey of seeking protection in Australia. “We did not leave our home country by choice. We were forced…We escaped from extreme persecution and genocide at the hands of the Burmese military. In Burma, Rohingya people were stripped of citizenship before I was born. We are called “the most persecuted people in the world” by the United Nations.” said Ms Ullah.

Ms Ullah continued to describe the difficulties she faces in Australia today reiterating that permanent protection is what would make the biggest improvement in the lives of refugees here. “People assume our pain is over once we start living in a country like Australia. But, that is far from the truth… And every day, we have to sacrifice, endure, compromise and wait for who knows how long for things to get even slightly better. ” Despite having been accepted to university, because she is on a temporary visa, she has to pay international student fees which makes university completely unaffordable for her and anyone else in her situation.

“People with lived experience were front and centre at the rally, bravely sharing how they and their communities have been so detrimentally impacted by punitive government policies. The system has broken and fractured people and now is the time to grant people the permanent protection they need to enable them to move forward with their lives,” said Miriam Pellicano, Executive Manager, House of Welcome.

Michael Whaites, a director from the NSW Nurses and Midwives Association reiterated the importance of freeing the Medevac refugees and the physical, psychological and emotional toll that immigration detention has on people seeking asylum.

“Coming to the rally was my way of showing support for people seeking asylum as well as for the many volunteers and advocates working to bring about change,” said Fay Hair, a Catholic parishioner from Sydney who attended the rally. Hearing the stories of people seeking asylum has led Fay to their admire their strength and resilience but also triggered her frustration and anger about how Australia can treat human beings so poorly.

While many of the supporters there have been advocating for years, the recent crises in Afghanistan and Ukraine have brought the plight of people seeking asylum to the forefront of many more people’s minds. It has made more people realise that people seeking protection aren’t doing anything wrong, they are just looking for a safe place to live and start their lives over. Any one of us could be living an ordinary life, but due to the ill-considered and senseless decisions of some leaders, we could find ourselves fleeing our life-long home with almost nothing and no certainty as to our future.

It is this knowledge that inspires us to stand for justice in support of people seeking protection and we will continue to do so until everyone is treated with the dignity and respect they deserve as our brothers and sisters.