A Prayer of Hope

We came together on Palm Sunday, gathering in front of a hotel in which refugees continue to be imprisoned.

The windows had been deliberately tinted so all we could see inside was darkness.

Despair descended upon us.

Suddenly from a window high above, a few faint lights began to move slowly back and forth in an arc.

Oh, the fragility of hope. The refugees were gently waving to us, using their mobile phones.

This was a small but precious gift of hope that they, who had suffered so deeply, gave to us at the start of Holy Week.

Let us gather all the small and precious gifts of hope we can find so they can speak to the condition of the world.

Sisters and brothers of all faiths, the spirit of our age is one of darkness and despair.

May we find within ourselves and within one another the Light to nurture hope and to illuminate the path on which we walk together in peace.

Faint lights moving back and forth,

Held by men invisible behind a tinted window,

An arc of light silently communicating with protestors below.

On this day, the start of Holy Week.

Despairing and struggling to comprehend.

And now confined in hotels for over a year.

Some released, but these men left to suffer.

Whose idea was it to tint the windows?

Who ordered it to be?

Who did this task

So those in the street should not see?

One among countless acts of cruelty,

Oh, the banality of evil.

Faint lights moving back and forth,

Oh, the fragility of hope.

Dorothy Scott is an Elder of Religious Society of Friends (Quakers). She wrote this

prayer and poem in Autumn 2021, inspired by the 150 Days of Action campaign. 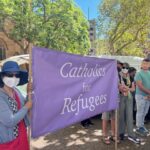 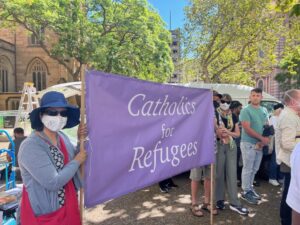